Description: The below game is a simple but powerful one that is used to show the benefit of tighter feedback loops that come from frameworks such as using agile.

Thanks to Nanda Lankalapalli for introducing this game to me.  The original description can be found on his blog.  I first played this game when I took a trip to Denver and visited ePlan Services.  The purpose of the trip was to meet Lisa Crispin (co-author of Agile Testing) and observe how her team implemented scrum.  During my 2-day visit, I was introduced to Nanda and we played this game.  Since then, I created my own Jenga set and introduce the game to most of the teams that want to start developing software more incrementally. 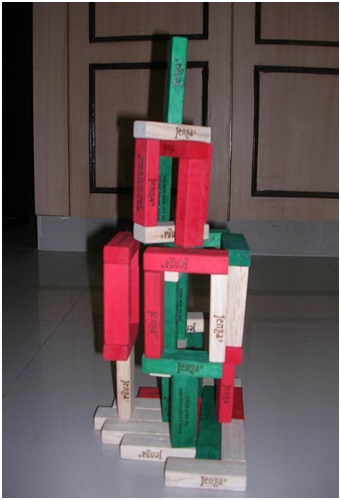 There will be 3 rounds.  Requirements remain the same, the only difference in each round is how soon/how often we get to “test” the structure.  For each round, a new set of 4 random numbers between 1 – 36 will be written down as “bugs” to be fixed.  Each round will begin with the developer building the structure to the requirements, with the tester providing feedback based on the rules of the round.

Recommendation: Try to switch the roles that people typically play (ex. have a tester play the developer role and a developer play the tester role).  This will allow each person to gain some insight into the other roles on the project.

Tester and developer when working together, deliver high quality software with less rework. The first case depicts water fall where testing happens after the software is built. If the bugs found are more fundamental (like blocks in the first level), the project will be delayed more as rework is introduced.

In the second case, feedback is faster. Developer could correct the code early and there is less risk than the Option 1.

In the third case, it is the most agile way and the tester is helping developer avoiding putting the bugs in. It may not be possible to reach this in software development. Getting as close as possible to this level of agility is what an agile team should try for.

Some ideas/thoughts to expand on these concepts: