In my first blog post (How I Use Earned Value Management (EVM) to Track Agile Scrum Projects), I showed how I use some EVM concepts to track agile projects.  One of the comments from that post criticized the model because it did not incorporate SPI and CPI.  As a result, I expanded on the model to take advantage of these calculations.  Please note that the calculations below use hours as a stand-in for cost.  To determine cost, simply multiple the hours by the hourly rate for the project.

Estimate at Completion (EAC) is what we expect the project to cost once we complete it.  Initially this would be your Budget at Completion (BAC), or the estimate for the project.  As you execute the project, unless you were 100% accurate in your estimate and everything goes according to plan (is that even possible), your EAC will begin to vary from your BAC.

So if we take the initial scenario from the first blog post and add a few calculations, we get the following. 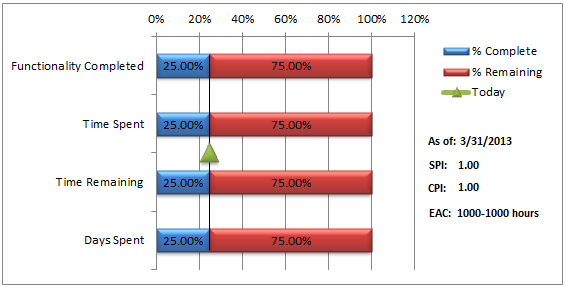 SPI: 0.52, since we have completed 13% of the functionality after we have consumed 33% of the schedule.

EAC: Range of 1370 – 6935 hours, since we have delivered less value than expected.  There are 4 different formulas to calculate EAC.  We can use all 4 formulas, and then provide a range based on the highest and lowest EAC.  In our example, the lowest EAC comes from AC+(BAC-EV) and our highest EAC comes from AC + ((BAC – EV) /(CPI*SPI)).

*Note: You may choose to use a single EAC calculation based on which formula you think is most pertinent to your situation.  In this example, the calculation that produces 1,370 assumes that the current CPI is abnormal.  If this is not the case, then you could remove that estimate and end up with a range of 3,846-6,935.

So there you have it.  We used the building blocks from the initial Agile EVM model and added some additional measurements for scope, schedule and cost baselines.  By doing so, we also project a range for the final project cost (EAC).

A second criticism from the original post is that “Story points are subjective and do not have the objectivity of measurement in $ or man-hours”.  While I agree that story points are subjective, I also believe that they provide more value than estimating time/money spent (see Time Remaining is More Important Than Time Spent).  A team estimates them and uses relative estimation, so that each story is sized according to each other.  I believe it is better to measure work than has actually been completed instead of what we have planned & estimate we will deliver in the future.  While this may not directly correlate to business value (completing 25% of story points does not necessarily mean that we deliver 25% of the business value), it is measuring each story compared to the overall size.  In the future, I may look into adjusting the model to also gauge business value as compared to the other factors.

Please feel free to leave comments as I am very interested in the thoughts of this model.  Does it make sense?  Are there inaccuracies?  Are there additional calculations that could be added to provide more value?