My wife was always big on “todo lists”.  She had lots of them and swore by them.  So when I first arrived at the point when I could no longer track everything that I needed to do in my head, I started using post it notes for my todo lists.    It was not long before I became overloaded with post it notes (see an example below)… 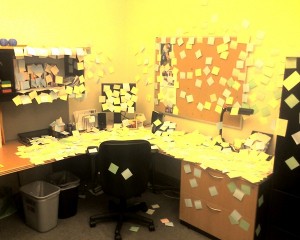 But that wasn’t the biggest problem.  The biggest problem was that my notes were all at the my desk, but some of the items I needed to be at another place to do.  I had no idea how to handle this issue, short of bringing my post it notes with me every where I went and reviewing them consistently.  This seemed excessive.

Why don’t we do this with the rest of our “todo lists”?  If you are anything like me, my todo lists were just a giant mess of everything and anything that I needed to do.  They were not very well organized, and definitely were not grouped by context.  So I may have something that I needed to do when I was at my wine store, but my generic todo list was sitting at my home office.

So I have reorganized all of my todo lists to be organized by context.  Below are the current context lists that I use.

@HomeOffice – Things that I need when I am working in my home office.
@HomeProjects – These are projects that I need to do around my house (the never ending list)
@Perry/Warsaw – Things I have to do when I am in Perry/Warsaw, which is the physical location of my real estate and wine store.
@Phone – Calls that I need to make when I have a phone (ex. I use this list a lot to make calls on my bluetooth while driving)
@Someday – This is the list where I throw things that I need to do eventually.  I periodically review this list and move items onto other context lists.
@ToRead – This is my list of articles/emails to read.  Since I always have my smartphone I use read just about anywhere.
@WaitingFor – The list of responses that I am waiting on other for.

These list now allow me to quickly grab tasks to knock off based on my context.  I don’t waste time on tasks that I can only do when I am in Perry, because I only look at my @Perry/Warsaw context list when I am in that context.  It may take a little bit of time to get used to, but I have found that it makes it much easier for me to knock things off my todo lists.

For additional reading on related topics, check out:

Book Review: Getting Things Done: The Art of Stress-Free Productivity by David Allen